November 20, 2014 By Roger Rowett With no comments yet

Nearly 30 people were involved in the workshops including pupils, parents, representative from the school, and linked professionals from the third sector. The aim was to engage people in exploring how everyone could contribute to raising the achievements of pupils from the school. 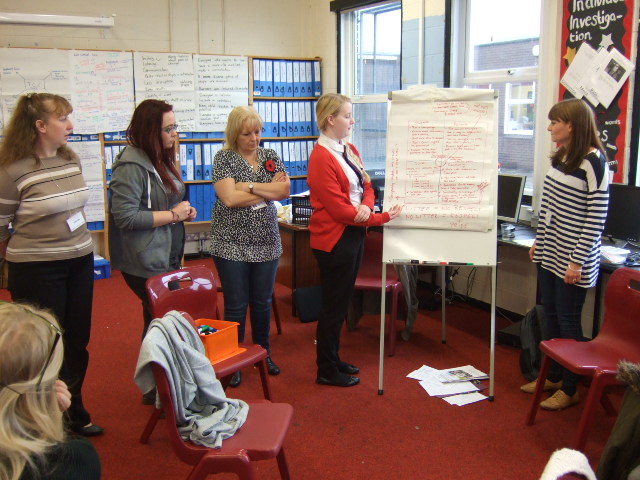 This was the first stage of a three phase project. During stage one people attended either a one day or three day workshop during November. This involved gaining an understanding of Appreciative Inquiry (AI) and being part of an AI process that started to explore what worked best in relation to learning and achievement and why. Participants then went on to look at their aspirations for the future of the school. All this was done using the Appreciative Inquiry 5D process.

The second stage will be for these AI Champions to cascade the questions to others within the school in order to feed all this back into an AI Summit in the New Year. This will involve as many people as possible designing a plan for the future that they have real ownership of.

Emily Cook, the Wales Engagement Officer from Teach First provided feedback and said “We had an excellent time, learnt a huge amount and I was especially impressed at the fine line between informality to encourage people’s participation, and expertise in leading the group session. I thought you managed this perfectly, and you brought out the best in the group. I saw this particularly evident in the increased effort put in by the young people involved throughout the three days, and that they stayed beyond their usual lesson times during breaks etc. We felt that the level of energy created was exceptional, and everybody who did the three days especially were incredibly impressed at the process“.

Graphic produced by Teach First after the workshop